The cycle path of the German wine route runs along the western Rhine plain through the extensions of the Palatinate Forest for about 89 km. Detours on panorama routes can add an additional 35 km. The cycle path starts in Bockenheim, at the Haus der Deutschen Weinstraße, and ends in Schweigen-Rechtenbach, at the Deutsches Weintor, close to the German-French border. For a better link to the rest of the cycle path network the Wiki continues with the path into the south until it reaches Wissembourg/Weißenburg (F).

Winegrowing has shaped the region’s hilly landscape for centuries. Picturesque wine villages with old half-timber houses and winding alleys lie close together and if you look closely, you will even be able to recognize hints of Mediterranean vegetation. The region around the German wine route is called Germany’s Toscana for a reason, because here the climate has Mediterranean features.

The main emphasis of a bike tour along the wine route is on enjoying the scenery and beautiful landscapes, and you should make sure to allow yourself enough time for it. Visiting a Palatinate bar, sitting outside on a sunny terrace or enjoying a wine degustation in a shady backyard simply is a part of this bike route. However, a bike tour in this hilly landscape requires some stamina. Completely flat sections are rare, as you can see on the altitude profile. Usually, the route leads you uphill or downhill and sometimes you should be prepared to simply walk your bike. In total, you will have to overcome an altitude of 1000-1200 metres.

The reward for your efforts is a breathtaking landscape, picturesque villages and experiencing the typical Palatinate cosiness. From March to October, there are many wine festivals on weekends and it is highly likely that you will chance to come upon one in one of the many wine villages along the route. You can find a calendar of events here.

While the important winegrowing communities at the Rhine and Moselle have in parts been shaped strongly by tourism, the wine villages along the wine route have been able to preserve their original character. On weekends in spring and autumn, the street scene is dominated by day trippers of the surrounding areas. Therefore it is recommended to take your trip along the German wine route during the week. For an overnight stay you have a wide choice in hotels, guesthouses and rooms, which sometimes are located directly in the middle of a vineyard estate.

Most of the time you will be driving on asphalt bikeways or agricultural roads, but sometimes streets are unavoidable. City traffic is to be expected in Grünstadt, Bad Dürkheim and especially in Neustadt. The bikeway is signposted without any interruption at all. Sometimes the routing is not very clear, and you can be confused easily because of the many choices in alternative routes. The routing presented in the Wiki is only one of many possible routes you can take on your tour.

Both the starting point in Bockenheim and the endpoint in Wissembourg/Weißenburg (F) can be reached by train. However, there are many chances to board or disembark in between. You can find more detailed descriptions of the train stations in the Roadbook. 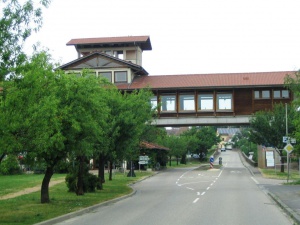 The cycle path of the German wine route starts at the Haus des Deutschen Weines, a rather building, which has been built like a gate across the street.

At the end of the village you have to turn right onto an asphalt agricultural road and follow it until you reach Asselheim. 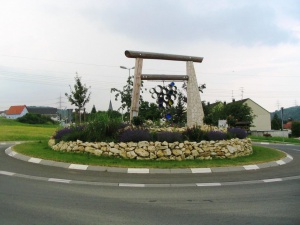 At the roundabout you will find a useful road sign for cyclists, pointing you in the right direction. You follow it through town into the direction of the local train station. At the end of the town – near the railroad bridge – you may turn right to reach the train station or you may turn left to find an asphalt cycle path leading you to Grünstadt. If you follow the road sign in the left direction you will directly pass the town’s train station.

There are some shops, ice cream parlours and cafés in the city centre.

After underpassing the A6, you use an asphalt agricultural road to cycle through the vineyards. From here on winegrowing is your constant companion. There is a vehicle-free cycle path until you reach the city centre of Kleinkarbach.

You have to take the high street through town and use a dextral and separate cycle path running along the road when you reach the end of town. 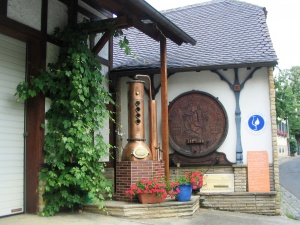 In Weisenheim you pass a distillery.

In Weisenheim the cycle path leads you through town by taking detours. Of course you can take shortcuts, but the more beautiful part of town can be found beside the cycle path. The continuation of the journey takes place on an asphalt agricultural road, which is slightly rising in altitude and leads you through extensive vineyards.

You travel through Leistadt straight ahead by using the high street. At the roundabout at the end of the village you have to turn right onto a quiet side street and after 50m turn left onto an asphalt agricultural road. You follow this steep agricultural road until shortly before Bad Dürkheim where you find an accompanying cycle path near the first roundabout.

The city centre of Bad Dürkheim is a pedestrian area, which is blocked for cycle traffic. However, the Weinfass, the spa gardens and the beautiful heart of the town are rewarding destinations.

There is the Bad Dürkheimer Wurstmarkt in front of the Weinfass each year in September. It is the largest wine festival in the world.

To use the cycle path leading you around the city centre you have to follow the road sings at the first roundabout. If you wish to visit the centre, you will find road signs for it in the same spot.

Continuing your journey you will pass a large car park and have to turn right at the saline. At the next crossroads you have to turn right once more, then continue straight ahead at the traffic lights crossing and take a small climb until you reach the railway crossing. This path leads you along the railway line and later on through vineyards. 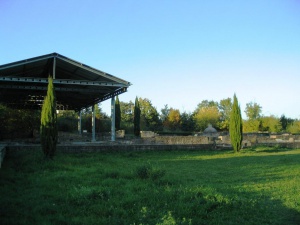 Shortly before you reach the village boundary you have the chance of taking a detour leading you to the Villa rustica. Here you can visit the ruins of an old Roman manor without having to pay any entrance fees. Road signs lead you to the villa on a vehicle-free road. It takes around 1.2km, but the road is drivable and well signposted.

At first you take local roads leading you through Wachenheim and afterwards asphalt agricultural roads. Shortly before Forst you pass a graveyard with a standpipe. 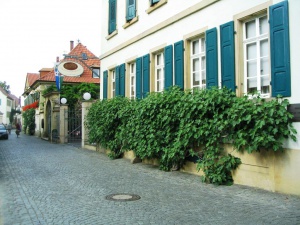 Fig tress at an exterior wall in Forst

The road leads you through the village in a straight manner until you have to switch to a cycle path running along the road shortly before you reach the end of the village. 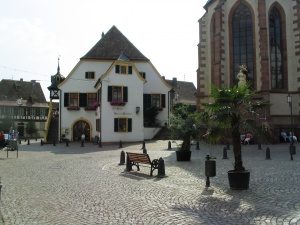 There is a billy goat auction each year on the first Tuesday after Pentecost. You can find more information about it and other festivals here.

At the end of the village you have to take an asphalt cycle path running along the left side of the road until you reach the following crossroads. Afterwards you have to take an agricultural road separated from the road. Here you follow the road signs leading you into the direction of Neustadt.

Gimmeldingen looks out on the beautiful Rhine plain.

You cross Gimmeldingen on quiet local roads and reach the neighbourhood of Neustadt without a break. 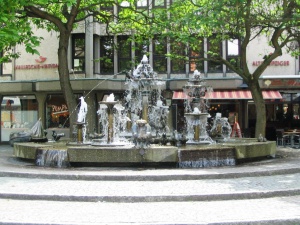 Elvetritschenbrunnen (Elvetritsche = mythical creatures) in the city centre of Neustadt

Here in Neustadt you meet lively urban traffic to some extent. You have to take the road due to a lack of any cycle paths. You can rely on the road signs of the cycle path ‘Deutsche Weinstraße’ leading you through town and you are able to follow the road signs very well. The route leads you around the city centre into the direction of the local train station. Here you take the bridge to cross the railway line, followed by a longer climb. Afterwards, you follow the road signs until you reach the end of the town. From here on you take asphalt agricultural roads through vineyards, leading you into the direction of Hambach. Ahead of you there is the Hambacher Schloss on the hillside. You travel through Hambach on quiet local roads and continue your journey on agricultural roads leading you through vineyards.

You travel through Alsterweiler on quiet local roads. At the end of the village you continue on a quiet minor road. The official cycle path turns left after around 200m. This, however, is a detour. You can stay on the road until you reach the following T-crossroads. There you can connect to the official cycle path again by following the agricultural road straight ahead. It leads through vineyards until Edenkoben. Shortly before Edenkoben there is a graveyard with a standpipe.

You travel through Edenkoben on a quiet local road. You continue with your journey on an asphalt agricultural road until you reach Rhodt. Here you take the high street and at the end of the village switch to the agricultural road on the left side, leading you to Hainfeld. 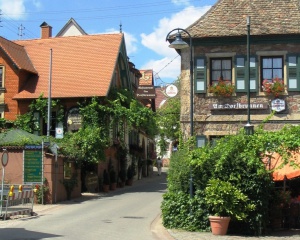 Agricultural roads – partly running along the road, partly running through vineyards – lead you through Burrweiler and Gleisweiler to Frankenweiler. Shortly before you reach Frankenweiler there is a graveyard with a standpipe. At the end of the village you take a quiet rural road and turn left after around 300m. This leads onto an agricultural road which is gravelled at first, but turns into an asphalt road later on. Here you follow the road signs. 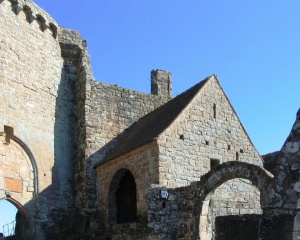 You travel through Klingenmünster on local roads. Afterwards you travel through a park with seats for taking a break. You have to take a steeply ascending agricultural road until you reach Gleiszellen.

The main through-road is among the most beautiful along the wine route.

You continue with your journey on agricultural and travel through Gleisharbach until you reach Pleisweiler-Oberhofen.

At first you take a small climb on the road. Afterwards you are able to bowl easily. 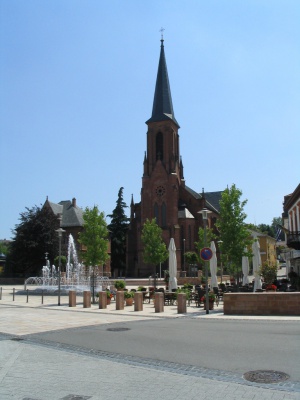 You travel through Bad Bergzabern on local roads. Due to one-way street regulations the cycle path in the opposite direction runs along a different pathway. This may cause some confusion on your way through the city centre. Therefore it is recommended to take the route which has already been tested successfully.

At the end of the town the cycle path continues on agricultural roads through vineyards with some climbs and slopes.

You take an agricultural road through vineyards for the last time. 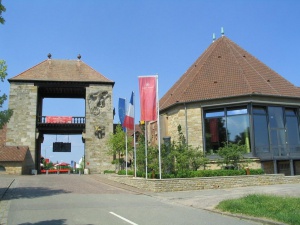 The official cycle path ends at the Deutsches Weintor, which was built in 1936 to promote tourism. Here you can find a hotel and a restaurant. On its terrace you are able to enjoy a wonderful view on the Rhine plain as a fitting end of your bike tour.

There is also a vinothek directly next to the Weintor. This is your last chance of taking part in a wine degustation if you did not do so already on your tour.

After passing through the Weintor you take the roundabout straight on and continue on a small slope in the direction of the border. However, the border is of no importance anymore today. You take a narrow cycle path into the direction of Wissembourg’s city centre. Most of the time the path leads on straight ahead with small turns in-between. This way you reach the local train station. 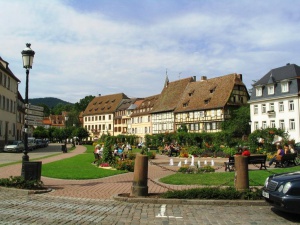 If you still have time until your train departs you can visit the picturesque city centre or sample the range of goods in a French supermarket.